Back to Throat and Neck

The tonsils and adenoids, part of the lymphatic system, help protect you from infection by trapping germs that come in through your mouth and nose.

Sometimes your tonsils and adenoids become infected (called tonsillitis) causing a swollen and sore Adenoiditis and recurrent tonsillitis (sometimes referred to as adenotonsillar disease) are caused by chronic inflammation triggered by a persistent bacterial infection of the adenoids or tonsils.

Take this quiz about tonsils and adenoids.

The tonsils are small, round pieces of tissue located in the back of the mouth. Tonsils are thought to help fight infections by producing antibodies.

Tonsillitis occurs when the tonsils become inflamed from infection. The symptoms of tonsillitis vary greatly depending on the cause of the infection and can occur either suddenly or gradually.

The following are the most common symptoms of tonsillitis:

The symptoms of tonsillitis may resemble other conditions or medical problems. Always see your otolaryngologist for a diagnosis. 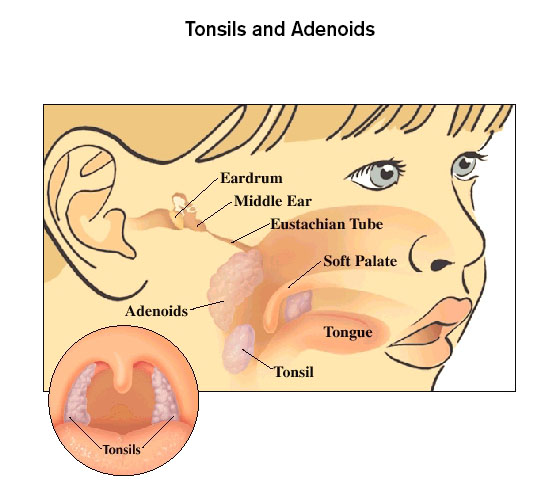 Adenoids are made up of lymph tissue and are located in the space about the soft roof the mouth. Adenoids may cause problems if they become enlarged or infected.

Hypertrophy of the Adenoids

Chronic or recurrent inflammation of the adenoids can result in hypertrophy (enlarged adenoids) making it hard to breathe and causing a sore throat or ear problems.

Adenoiditis is when the adenoids become inflamed often triggered by a persistent bacterial infection of the adenoids or tonsils.

What are the symptoms of adenoiditis, or enlarged adenoids?

The symptoms of adenoiditis may resemble other conditions or medical problems. Always see your otolaryngologist for a diagnosis.

A nasal obstruction is anything that impedes the flow of air into and out of the nose. The obstruction may block one or both of the nasal passages.

Although most cases of nasal obstruction are temporary (caused by sinusitis, allergies or overuse of nasal sprays), a blockage may also be caused by an anatomical factor, such as a deviated septum, nasal polyps or foreign objects.

Avoidance of an allergen, if the cause is allergic, can help alleviate symptoms. If the cause of the obstruction is anatomical, surgery is usually required.

Treatment for Tonsillitis and Adenoiditis

Antibiotics can be successfully used to treat infectious processes associated with adenotonsillar disease.

You will receive a thorough diagnostic examination to evaluate if you have a tonsil or adenoid condition and determine what course of treatment is needed. Careful monitoring and the involvement of an experienced otolaryngologist are important to the successful outcome for patients with ear, nose and throat disorders and conditions.

The day of surgery, you will be taken care of in the operating room by otolaryngologist, anesthesiologists and nurses who specialize in surgery for patients with tonsil or adenoid conditions. After surgery, you will go to the post-surgical care unit where you will receive comprehensive care by experienced surgical and nursing staff.

Brigham and Women’s Faulkner Hospital provides a multidisciplinary approach to patient care by collaborating with colleagues who have extensive experience in diagnosing and treating ear, nose and throat disorders and conditions. In addition, patients have full access to Brigham and Women’s Hospital's world-renowned academic medical community, with its diverse specialists, and state-of-the-art facilities.