Back to Nose and Sinus

The nose is the organ of smell located in the middle of the face. The internal part of the nose lies above the roof of the mouth. The nose consists of:

Conditions affecting the nose including snoring, deviated nasal septum, nasal obstruction, nasal polyps and nosebleeds are treated and managed by the specialists in Brigham and Women's Division of Otolaryngology at Brigham and Women’s Faulkner Hospital.

The nose is separated into two chambers by the nasal septum, which is made of cartilage. A “deviated” septum is a condition in which the septum (or partition) between the nostrils is not in a straight vertical alignment. A deviated septum may be present at birth, caused by an injury, or result from damage from previous medical treatments.

The most common symptom as a result of a deviated septum is difficulty breathing through the nose. The symptoms are usually worse on one side, and in some cases the drainage of the sinuses is curtailed and causes repeated sinus infections.

Otolaryngology specialists at BWFH provide effective treatment for deviated septum. A common treatment is a septoplasty. This is a reconstructive surgery (performed entirely through the nostrils) to correct an improperly aligned nasal septum. During the procedure, badly deviated portions of the septum may be removed entirely or they may be readjusted and reinserted into the nose. 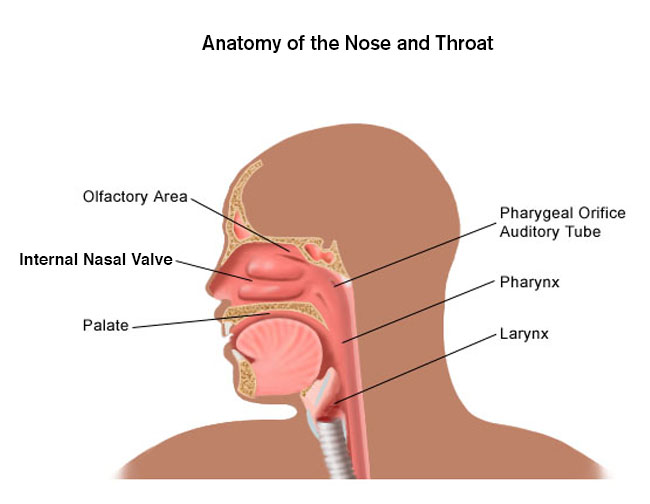 Nasal obstructions can contribute to airway compromise and difficult breathing. They are often seen in many craniofacial syndromes, but can also be acquired through injury. Nasal congestion can significantly contribute to sleep dysfunction leading to daytime fatigue and dysfunction.

Treatment for nasal obstruction depends on the underlying cause and may require both medical and surgical therapy.

A nasal polyp is a growth on the mucous membrane inside the nose. Sometimes, these polyps can grow large enough to block nasal passages and must be removed surgically. These polyps should not be confused with cancerous growths.

When evaluating a patient with polyps, the otolaryngologist often works closely with BWFH allergy specialists because polyps caused by asthma or allergies can cause nasal passages to swell. This constant swelling often leads to polyp formation.

Effective treatment by otolaryngology specialists is achieved by various therapies including surgical options. Medical management includes antibiotics, topical, nasal and oral steroids and allergy medication. Surgical management might be necessary and would include sinus surgery.

One of every seven people will have a nosebleed at some point in their lifetime. Although nosebleeds can be frightening, they are rarely dangerous. They are very common especially in winter when dry air causes drying, cracking or crusting inside of the nose. The majority of nosebleeds occur in the front part of the nose close to the nostrils.

The medical term for nosebleeds is epistaxis.

In general, call your otolaryngology specialist for nosebleeds if:

If nosebleeds present a problem, consider consulting with a BWH otolaryngologist. Two of the most common treatments are cautery and packing the nose. During a cautery procedure, the otolaryngologist burns the blood vessel with an electric current, silver nitrate or a laser. Packing the nose involves creating pressure on the blood vessel inside the nose through the use of special gauze or an inflatable latex balloon.

Snoring is due to turbulent airflow in the upper airway. More than forty-five percent of all adults snore occasionally, and twenty-five percent snore enough to disturb their sleeping partner. In addition to disturbed sleep patterns and sleep deprivation, other serious health problems may result. Snoring can be harmless or a sign of underlying obstructive sleep apnea, a more serious condition associated with cessation of breathing at night.

Heavy or chronic snoring may also be a symptom of other medical conditions and should be evaluated by an otolaryngology specialist. Treatment is usually managed medically and can include a nasal mask that provides continuous positive airway pressure (CPAP), a dental appliance for mild to moderate obstructive sleep apnea or surgery.

Medical management (non-surgical) for snoring is the preferred option. However, there are several surgical treatments offered by BWH otolaryngologists.

You will receive a thorough diagnostic examination to evaluate if you have a nose condition and determine what course of treatment is needed. Careful monitoring and the involvement of an experienced otolaryngologist are important to the successful outcome for patients with ear, nose and throat disorders and conditions.

The day of surgery, you will be taken care of in the operating room by otolaryngologist, anesthesiologists and nurses who specialize in surgery for patients with nose conditions. After surgery, you will go to the post-surgical care unit where you will receive comprehensive care by experienced surgical and nursing staff.

Brigham and Women’s Faulkner Hospital provides a multidisciplinary approach to patient care by collaborating with colleagues who have extensive experience in diagnosing and treating ear, nose and throat disorders and conditions. In addition, patients have full access to Brigham and Women's Hospital's world-renowned academic medical community, with its diverse specialists, and state-of-the-art facilities.