Acute and Chronic Infections of the Middle Ear (Otitis Media)

Otitis media—commonly referred to as an ear infection—is infection or inflammation located in the middle ear. Although primarily a disease that occurs in children, otitis media can affect adults as well. Inflammation usually begins when infections—due to sore throats, colds, or other respiratory problems—spread to the middle ear. These infections cause fluid buildup behind the eardrum.

Infection of the Ear Canal (Swimmer’s Ear or Otitis Externa)

Swimmer's ear, also called otitis externa is a painful inflammation and infection of the ear canal.

A rare but serious infection called malignant external otitis or skull base osteomyelitis can develop if bacteria invade the bones inside the ear canal and spread to the base of the skull. Not many people get this infection—it is mainly seen in older adults who also have diabetes, people who have HIV and children who have impaired immune systems—but it can be fatal.

Causes of Infections of the Ear Canal

Swimmer's ear may develop when water, sand, dirt or other debris gets into the ear canal. Since it often occurs when excess water enters the ear canal, a common name for this inflammation is "swimmer's ear."

Symptoms of Infections of the Ear Canal

Treatment for Infections of the Ear Canal

Mastoiditis is an inflammation or infection of the mastoid bone which is part of the skull and is located behind the ear.  Mastoiditis may be mild or very serious. It generally occurs when a recent middle ear infection, also known as otitis media, spreads into the mastoid bone.

An abnormal skin growth in the middle ear behind the eardrum is called cholesteatoma. Cholesteatoma can be a birth defect (congenital), but it more commonly occurs as a complication of chronic ear infections.

How a cholesteatoma forms is not fully understood. But poor function in the eustachian tube leads to negative pressure in the middle ear. This pulls a part of the eardrum (tympanic membrane) into the middle ear, creating a pocket or cyst that fills with old skin cells and other waste material. The cyst can become infected and may get bigger and break down some of the middle ear bones or other structures of the ear, affecting hearing, balance, and possibly function of the facial muscles.

Cholesteatoma usually continue to grow if not removed. Surgery is effective, but you may occasionally need the ear cleaned by a health care provider. Additional surgery may be needed if the cholesteatoma comes back. 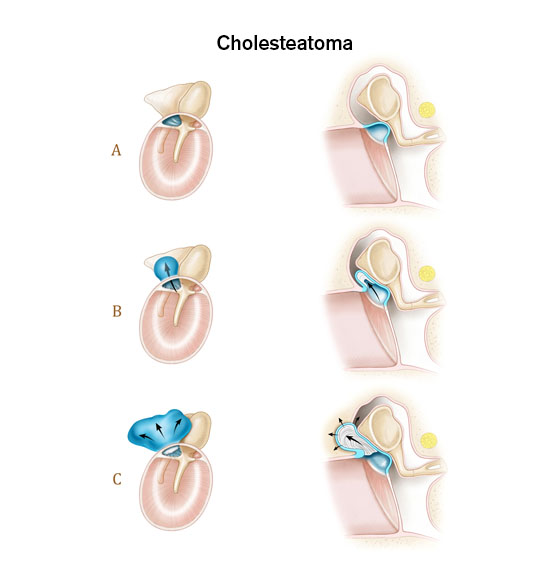 Tinnitus is the sound of ringing, roaring, buzzing, hissing, or clicking that occurs inside the head. The sounds may come and go, be continuous, occur in one or both ears, and vary in pitch. Currently, more than 50 million people in the United States suffer from some degree of tinnitus. According to the American Tinnitus Association at least 2 million experience it so severely that it interferes with their daily activities.

Although there is no cure for tinnitus, there are several options available that can help patients with symptoms.

Your eardrum is a thin membrane between your outer and middle ear. Sound waves entering your ear cause the membrane to vibrate, which enable you to hear. An injury or infection can cause your eardrum to tear (rupture). This creates a perforation (hole) that may affect your hearing.

Labyrinthitis is irritation and swelling of the inner ear. It happens when the labyrinth, which is responsible for hearing and balance, gets swollen and inflamed. Thus, it can cause vertigo and hearing loss.

The cause of labyrinthitis is not entirely clear. Labyrinthitis can happen after a viral infection or, rarely, after an infection caused by bacteria. It is often triggered by an upper respiratory infection, such as the flu or a cold. Less often, it may start after a middle ear infection.

Exams That May Be Prescribed

Your otolaryngologist will perform physical examination and will determine if more tests are needed. Such tests may include:

Most often labyrinthitis goes away on its own. In some cases, your otolaryngologist might prescribe steroid medicines which may help you get better more quickly. Other medicines can help to control the nausea and vomiting caused by vertigo.

You will receive a thorough diagnostic examination to evaluate if you have an ear infection or disorder and determine what course of treatment is needed. Careful monitoring and the involvement of an experienced otolaryngologist are important to the successful outcome for patients with ear, nose and throat disorders and conditions.

If you are having surgery or a procedure, you will likely be scheduled for a visit to the Weiner Center for Preoperative Evaluation for pre-operative information and tests. The day of surgery, you will be taken care of in the operating room by otolaryngologist, anesthesiologists and nurses who specialize in surgery for patients with ear infections and disorders. After surgery, you will go to the post-surgical care unit where you will receive comprehensive care by experienced surgical and nursing staff.

Brigham and Women's Faulkner Hospital provides a multidisciplinary approach to patient care by collaborating with colleagues who have extensive experience in diagnosing and treating ear, nose and throat disorders and conditions. In addition, patients have full access to Brigham and Women's Hospital's world-renowned academic medical community, with its diverse specialists, and state-of-the-art facilities.