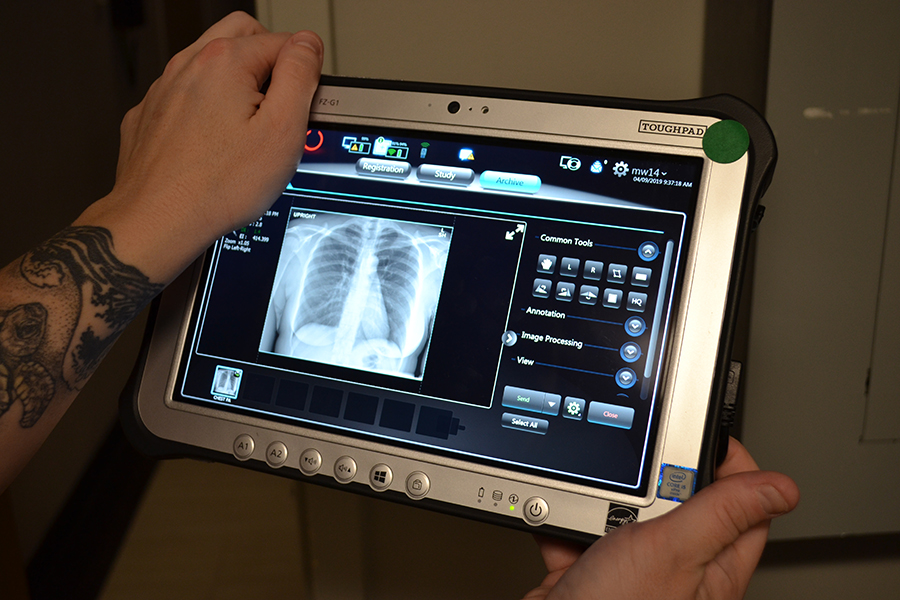 At Brigham and Women’s Faulkner Hospital, when an inpatient requires an X-ray, diagnostic radiology technologists travel to the patient’s room with a portable X-ray machine. Now, new technology is making that process easier for the technologists and also improving safety for the patients.

The improved technology includes updated digital detector plates and a tablet that work with the existing portable X-ray machine. “The new digital detector plates are a great improvement over our old system,” says Brian McIntosh, BS, RT(R), CRA, Director of Radiology at BWFH. “The image displays on the tablet seconds after it is taken, while the technologist is still with the patient. This allows the technologist to ensure they got the necessary image.”

“It’s so much easier for us,” says Diagnostic Radiology Supervisor Michelle Williamson, RT(R). “And it’s much nicer for the patient since we don’t have to disturb them more than once.”

Williamson says there are other benefits for patients, namely safety. “The new plates require less radiation to take an image,” she explains. “It’s a much smaller dose for the patients, which is important.”

Once the technologist has obtained the image, they simply plug the tablet into a workstation in the Radiology Department and make their notes. The files then go straight to the picture archiving and communication system (PACS) where a radiologist can read the test. “The whole process is really user friendly,” says Williamson.