In the inpatient setting, special care is taken to ensure dysphagia patients—those with trouble swallowing—get the proper nutrition they need, delivered safely. Whether it is solid food chopped or pureed to just the right size or the thickness of a liquid altered to make it easier to swallow, the texture of food must be just right for the level of dysphagia to ensure patient safety. That’s why the International Dysphagia Diet Standardisation Initiative (IDDSI) began its mission to develop a standardized way of naming and describing texture modified foods and thickened liquids for people with swallowing issues across the lifespan. And now, thanks to collaboration across our system, all of Mass General Brigham’s members have adopted the IDDSI framework.

Shannon Vukosa, RD, LDN, Clinical Nutrition Manager at Brigham and Women’s Faulkner Hospital, along with Caitlin Liberto, MS, MEd, RD, LDN, Patient Dining Operations Manager, Vukosa’s food service counterpart at Brigham and Women’s Hospital, first became aware of the IDDSI framework through Sodexo. “Sodexo wanted all of its entities to adopt the IDDSI framework to ensure all of its kitchens were preparing nutrition for dysphagia patients consistently and in accordance with established best practices,” says Vukosa. “Within the Brigham family, we were happy to adapt to the new framework, but knew it would mean a change to the way diet orders are named in Epic. And any changes in Epic would impact entities across Mass General Brigham, even those not operated by Sodexo, so we had to raise the issue with all of our colleagues across the system and ask that they follow suite in adopting the IDDSI framework.”

The issue was raised during the regularly scheduled Food and Nutrition Epic work group meeting. Because patient safety is a top priority for every Mass General Brigham member, Vukosa’s colleagues needed little convincing to adopt the new framework. But the project required much more than just changes in Epic.

Vukosa engaged with speech language pathology and nutrition colleagues across the system to chart a plan for implementation. “We started a Microsoft Teams work group where we could ask questions, share best practices and even share menu items,” she explains. “The kitchen staff needed to learn how to prepare their menu items according to the framework, our diet offices which take orders needed training, the providers needed to be informed of the changes to the medical record and the nurses needed to be made aware of new thickening agents that were being put into place. We spent a lot of time educating the care teams to ensure everyone was aware of the changes.”

So that every Mass General Brigham entity could go live with the IDDSI framework at the same time, the group did not rush. “I learned a lot working with the other entities,” says Vukosa. “For example, Spaulding has different requirements as a rehabilitation facility than we do as an acute care facility. Their patients stay longer so they have many more menu items, as well as other unique challenges. I now have a better understanding of their needs having worked through this process.”

In March of 2021, the IDDSI framework went live. “Now, if you go to any facility within the Mass General Brigham system, you will have the same diet texture. In fact, even if you go to a nursing home in France, you should have the same diet texture there as well,” explains Vukosa. “It’s a matter of patient safety and we all knew it was the best thing to do for our patients.” 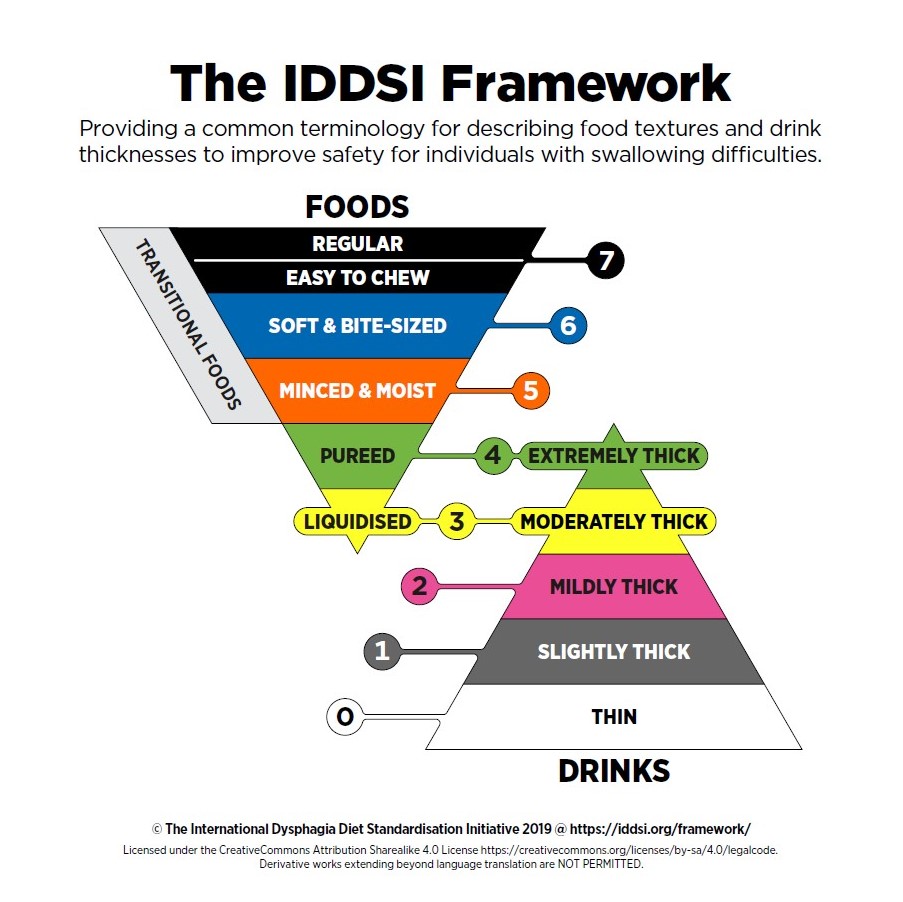