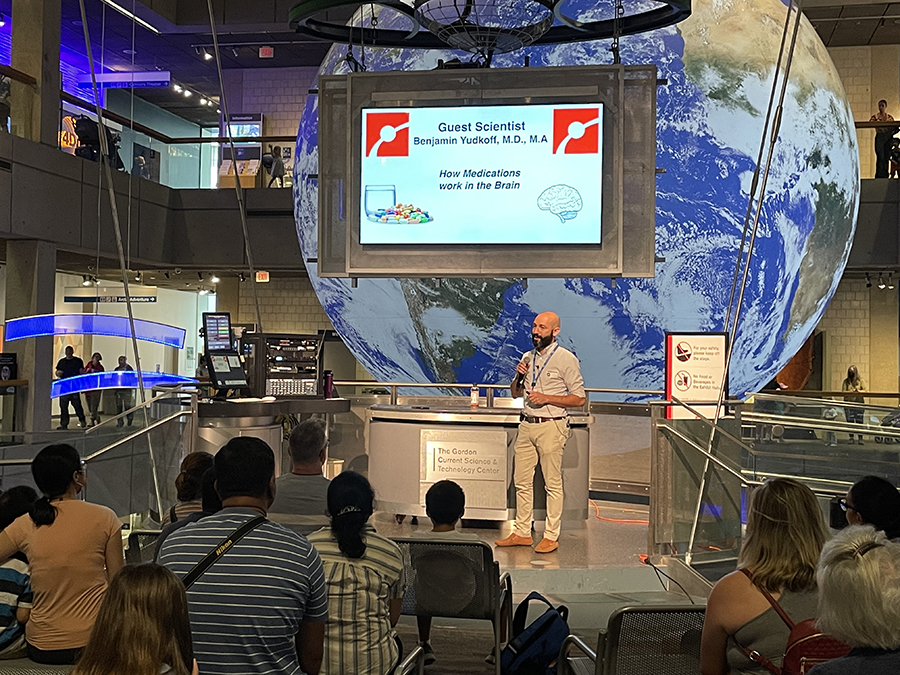 Photo courtesy of the Museum of Science

As part of their Guest Scientist series, Benjamin Yudkoff, MD, MA, Medical Director for the Partial Hospital Program and Ketamine Infusion Program at Brigham and Women’s Faulkner Hospital, recently presented “How Medications Work in the Brain” to a crowd gathered in one of the main exhibit halls at Boston’s Museum of Science as part of special programming on mental health.

Ranging in age from young children to senior citizens, Dr. Yudkoff tailored his presentation to the diverse crowd by using metaphor and analogy to explain difficult concepts and the engaged audience had many questions. “A lot of the questions were about hard science,” he says. “For example, one person asked how a neurotransmitter dissociates from the receptor. A young member of the audience asked how many connections there are in the brain. And another person asked if the changes to the structure of the brain that occur with medication are permanent. Some of it was a little beyond the 8-year-olds and some of it was a little too rudimentary for the 60-year-olds, but I tried to keep everyone involved by asking for feedback.”

As a person who has dedicated their career to this work, seeing such interest in psychopharmacology was affirming for Dr. Yudkoff. “I hope that I was able to demonstrate to the audience that the role of the psychiatrist is to diminish suffering and that psychopharmacology is not something to be feared, but something that can make a positive impact on a person’s life,” he says.

After the presentation to museum goers, Dr. Yudkoff then met with museum staff to continue the dialogue. “I am fascinated by psychopharmacology. I spend a great deal of my clinical hours talking about it and I was more than happy to spend some time outside of the hospital sharing my knowledge.”