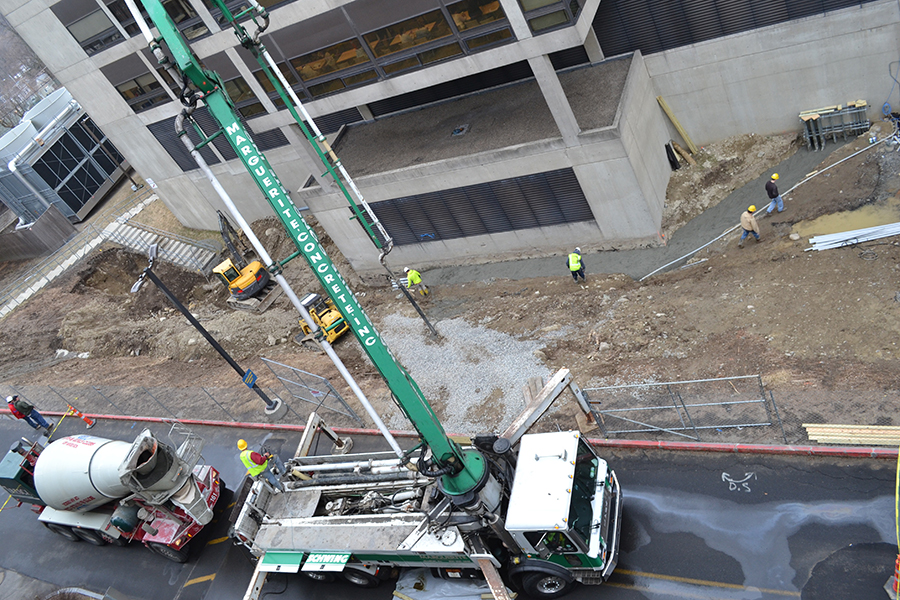 Workers pour concrete at the base of the third floor hill

Brigham and Women’s Faulkner Hospital recently embarked on an 18-month project to upgrade its central power plant, which is 40 years old. The goal of the project is to improve energy efficiency and reduce air emissions. It will also ultimately result in an approximate annual energy savings of $1 million.  With the current system, BWFH burns oil to make electricity. The new system will run on natural gas, which when burned produces less carbon dioxide, sulfur dioxide and nitrogen oxides than oil.

“The system we have now was installed in the early 1970s,” says Paul Keating, Director of Facilities at BWFH. “It’s at the end of its life expectancy so not only is the time right but it’s also the right thing to do from an environmental perspective.” When complete, the new system will create a significant reduction in overall power plant emissions.

The first phase of the project began several weeks ago when crews removed snow from the third floor hill to access the existing emergency generators which are being replaced with a new system. “We need to supply, connect and test the new emergency generators,” explains Keating. Once the new generators are in place, the old generators will be removed. “Currently the generators serve dual purpose: they provide emergency power and they allow us to cogenerate and produce some of our power that we produce on a day-to-day basis,” says Keating. “The new generators will produce the bulk of the power that we consume on a daily basis and then we’ll purchase the rest.”

Inside the power plant is where phase two begins. “We’re pulling out two high-pressure boilers that are original to the building and replacing those boilers,” says Keating. “Right now oil is their fuel source. In the finished product they will be dual fuel with natural gas as the primary fuel source.”

Finally, a new gas fired Combined Heat and Power (CHP) system is also being installed. The new system is designed to operate year round, connected in parallel with NSTAR’s power service to permit near full load operation, with total plant efficiency projected above 60 percent. Keating says of the project, “It’s pretty complex, but it’s exciting.”