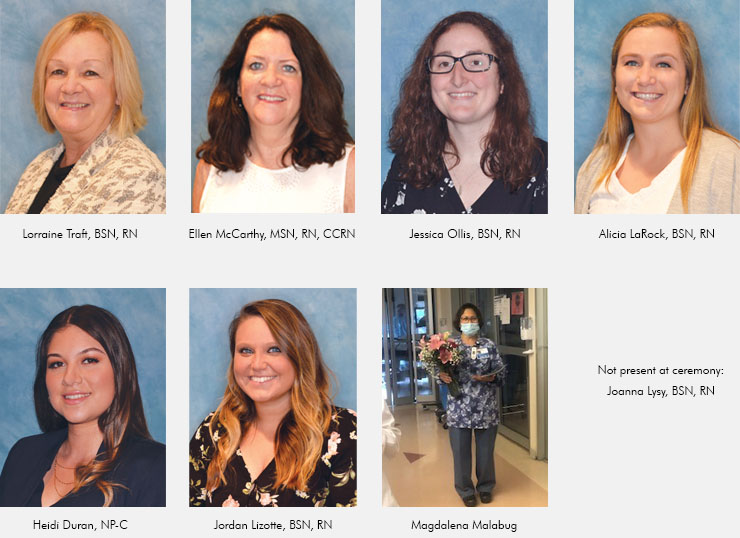 Each year, as part of its National Nurses Week celebration, Brigham and Women’s Faulkner Hospital celebrates its nurses with awards recognizing excellence in critical thinking, commitment to patient teaching, continuing education and outstanding delivery of patient- and family-centered care with compassion and dignity. National Nurses Week usually takes place annually from May 6 through 12, but due to the COVID-19 pandemic, this year’s festivities had to be postponed while the state battled surging numbers of new cases.

As a result, the 2020 Nurse Recognition Awards ceremony was rescheduled for September and presented as a scaled down event attended only by the award recipients and leadership. The ceremony was broadcast via livestream so that nursing staff, other BWFH colleagues and members of the recipients’ families could share in their special day.

Providing opening remarks at the Nurse Recognition Awards ceremony were BWFH President David O. McCready, and Chief Nursing Officer and Vice President of Patient Care Services Cori Loescher, MM, BSN, RN, NEA-BC, and Program Manager for Informatics for Nursing/Patient Care Services Paula Wolski, MSN, RN-BC. The speakers welcomed virtual and in-person attendees and thanked members of the Department of Nursing for the work they do to care for our patients and their families each and every day.

This year’s winners, listed below, are just a few examples of the amazing work being done within the Department of Nursing on a daily basis.

Emergency Department nurse Lorraine Traft, BSN, RN, was presented with the Mary Devane Award. The award was established in 1998 to be given to any member of Brigham and Woman’s Faulkner Hospital Department of Nursing (RN, PCA, UST, MHW, Secretary) in recognition of their commitment to delivering patient care with compassion, kindness and humor.

ICU Clinical Leader Ellen McCarthy, MSN, RN, CCRN, received the Elaine Hazelton Memorial Scholarship Award. Elaine Hazelton’s family established this award in 2009 to be given to a nurse who demonstrates a dedication to Brigham and Woman’s Faulkner Hospital within the practice and advance of nursing. This recipient should be continuing his or her nursing education.

6 North nurse Jessica Ollis, BSN, RN, received The Angela McAlarney Award. The McAlarney Award was established in 2003 to be given to a member of Brigham and Woman’s Faulkner Hospital’s Department of Nursing in recognition of excellence in patient and family education.

7 North’s Heidi Duran, NP-C, 6 North’s Jordan Lizotte, BSN, RN, and 6 South’s Joanna Lysy, BSN, RN, all received Mrachek Awards. The Mrachek Award was established in 1995 and is given to three members of Brigham and Woman’s Faulkner Hospital’s Department of Nursing in recognition of their clinical skills and to support their continuing education in the nursing profession.

Emergency Department nurse Alicia LaRock, BSN, RN, received the Newly Licensed Nurse Award. This award was established in 2019 and is given to a Newly Licensed Nurse hired in the previous 12 months at Brigham and Woman’s Faulkner Hospital in recognition of their personal and professional growth.

The Community Outreach Award, established in 2019, is given in recognition of a unit-based team or committee that has positively impacted a group or community outside of BWFH. This year’s recipient was the Cardiac Rehab team.

The Evidence-Based Practice Award, established in 2019, is given in recognition of a multidisciplinary unit-based team or committee with a project that contributes to evidence-based practice. This year’s recipient was 6 North’s Diabetes Project.

New in 2020 was the Emmly Fidelia Support Staff Award, which is given to a member of the Department of Nursing’s support staff, including PCAs, USTs, MHWs and Secretaries, in recognition of their commitment to the units and staff and their integral role in the delivery of care for our patients. The inaugural recipient of the award was Magdalena Malabug.

To watch a recording of the award ceremony, click here.