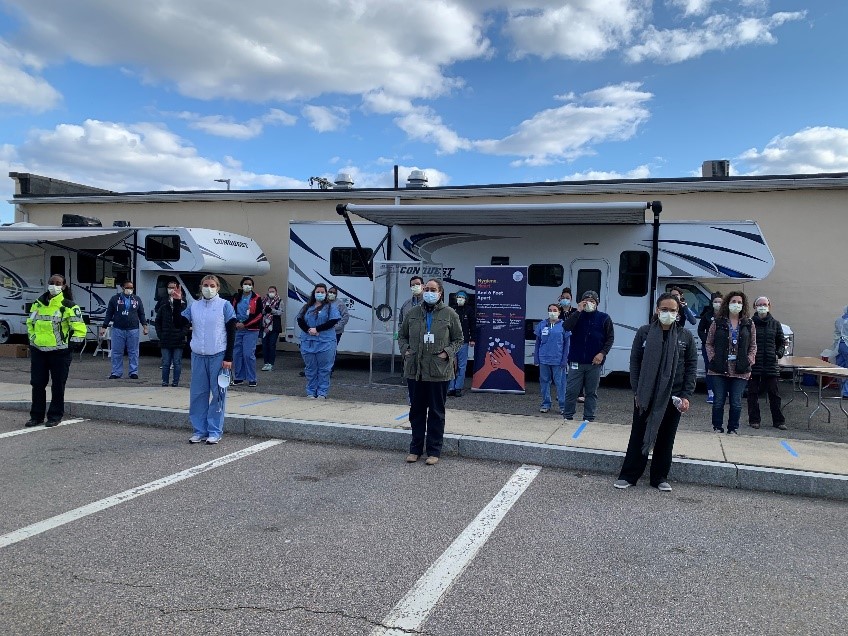 Members of the COVID-19 testing site at Brigham and Women’s Faulkner Community Physicians in Hyde Park.

When COVID-19 related closures first began happening in mid-March, Tracy Sylven, CHHC, MCHES, Director of Community Health and Wellness at Brigham and Women’s Faulkner Hospital, knew her role was about to change.  With schools moving to a remote learning model and many of the organizations she was collaborating with suspending activities, she knew it was only a matter of time before she would begin to see the needs of the community appear.

Just a couple of weeks later, Sylven found herself offering to help establish a COVID-19 testing site at Brigham and Women’s Faulkner Community Physicians at Hyde Park, a community deemed a hot spot for COVID-19 at the time.  And while she wasn’t directly involved with testing for COVID-19, her efforts continue to impact thousands of families in our surrounding communities.

From the first time she began meeting with a larger Brigham Health group of staff to establish a community testing site, Sylven suggested that everyone who came to get tested be offered the chance to be screened for food insecurity and provided food, if needed.  That suggestion turned into screening more broadly for social determinates of health (SDOH). Defined by the World Health Organization as the conditions in which people are born, grow, live, work and age, the SDOH are an underlying cause of today’s major societal health issues, including obesity, heart disease, diabetes and depression.

Over the next three months, what Sylven and her peers saw was staggering data.  In Hyde Park, 14 percent of the people who came to get screened were deemed food insecure.  And while that number is bad enough, it would represent the lowest percentage of any testing site they would establish.  At the Roxbury Tenants of Harvard site that number jumped to 24 percent before making another leap to 50 percent at the Tobin Community Center and 53 percent in Dorchester.  In total, of the more than 10,600 people screened for the SDOH at five testing sites, 31 percent were deemed food insecure.

These numbers represent the reason Sylven is so passionate about her work.  “I really believe the hospital has an increased responsibility to help respond to the growing demand for services in our communities,” she says.

And while the demand continues to exist, Sylven and her team are doing everything possible to make sure individuals and families have access to fresh food and other resources they need during this difficult time.  Over the course of the five testing sites from April 16 through July 10, Sylven distributed more than 162,000 pounds of fresh produce to families.  Of that number, Sylven believes they move each 20 pound box of food three to four times and often carry boxes of food to cars for people who are not able to lift them.

In addition to offering COVID-19 testing, SDOH screening and food distribution, each testing site offered residents care kits provided by Mass General Brigham, containing masks, hand sanitizer and information in several languages about how to stay healthy during the pandemic.  In all, more than 13,500 care kits have been given out.  As the testing site moved from one location to another additional services were added, such as voter registration and diaper distribution.

During the height of the pandemic here in Massachusetts, many restaurants were providing meals to hospital workers and other first responders.  However, as the number of COVID-19 positive patients has declined and restaurants began to scale back deliveries, Sylven jumped at an opportunity to shift those donations from front line personnel to people in need.  Working with Off Their Plate, a volunteer-powered, grassroots team that directs donated funds to local restaurants so they can continue to employ their staff and equip them to meet COVID-informed food prep protocols, Sylven is now coordinating the delivery of more than 1,100 meals a week in four Boston neighborhoods, many times handing out free food on the side of the road.

“Anyone in the community who is in need of a free, nutritious meal is welcome to stop by and pick one up,” says Sylven.  There’s never a meal left at the end of the day.