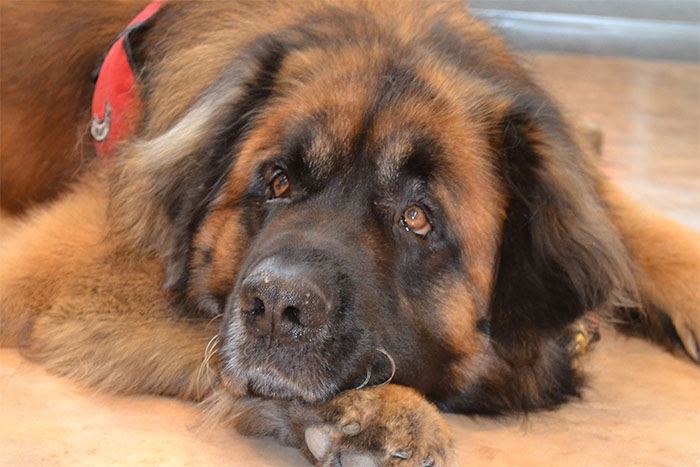 Many in the medical community agree that animals can play a significant role in the healing process. On 2 South, Brigham and Women’s Faulkner Hospital’s 24-bed psychiatric unit, patients receive evaluation and short-term treatment for a range of acute illnesses. And now, they have the added benefit of weekly sessions with Burton, a six-year old Leonberger therapy dog who weighs a whopping 150 pounds.

“Honestly, this is what you get,” owner/handler Pamela Isaacson says as she gestures toward Burton lying on the floor of the lobby and relishing in pats from passersby. “You get an absolute moving teddy bear.”

Isaacson and Burton came to BWFH through the Pets and People Foundation. The group trains handlers and their animals to provide “people therapy through pets.” The Pets and People Foundation then pairs appropriate animals with institutions throughout Eastern Massachusetts. Right away, it was clear Burton would be a perfect fit for 2 South. “He’s so sweet and he’s so very hypersensitive to people’s needs,” says Isaacson.

Psychologist Kevin Donnelly, PhD, saw the impact Burton can have during his very first group visit at BWFH. He describes the interaction between Burton and one young patient: “He came alive. You would not have known this young man suffered from any sort of illness in the presence of the animal.”

Particularly with patients experiencing agitation or who have trouble calming down on their own, a therapy dog can provide benefit. “People’s moods tend to improve and they become more functional, especially if they are pet lovers to begin with,” says Donnelly. “They get back in touch with that part of themselves and it contributes to a greater sense of wellbeing.”

Participants in the group are prescreened and either a nurse or mental health worker is present throughout the group session. Burton’s visits adhere to the stipulations laid out in a newly created policy regarding animal assisted therapy.

Burton himself truly seems to understand the importance of his work. “As soon as she [Isaacson] puts the therapy dog vest on him, something happens,” says Donnelly. He knows it is time to go to work.

Because the program is off to such a great start on 2 South, there is talk of expanding the use of animal assisted therapy to other inpatient areas at BWFH. Director Service Excellence and Special Projects Sarah Gardent, who helped to turn the idea into a reality at BWFH along with Psychiatric Nurse Director Paula Knotts, MSN, RN, says, “We know that inpatients in other areas of the hospital could benefit. We hope in the future to grow our relationship with the Pets and People Foundation.”