Today’s Special: Collaboration Across the System 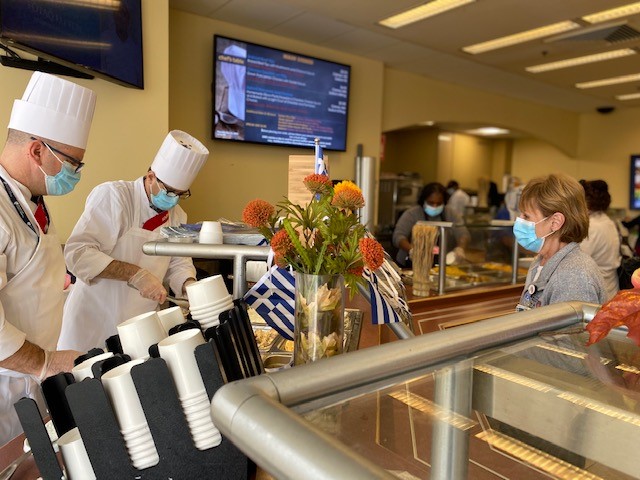 As a Sodexo employee, Langill has spent many years splitting her time between Jamaica Plain and Longwood. At BWFH, she oversees Food and Nutrition; at BWH, she oversees Food Services. Her approach has helped her find the right balance, ensuring operations at both campuses run smoothly.

While she keeps to a strict schedule—Tuesdays and Thursdays at BWH, Wednesdays and Fridays at BWFH and alternating every other Monday—her presence on both campuses has made her approach to work flexible. “By going back and forth, I can take the best of both and share them between the two locations,” she says.

Langill says the benefits to being part of a system are clear. At both BWFH and BWH, they use the same patient meal ordering software, which allows for financial savings. In fact, that software is used at several other Mass General Brigham entities and BWFH’s Clinical Nutrition Manager Shannon Vukosa, RD, LDN, has become the subject matter expert for the system. BWFH and BWH also use the same point of sale (POS) system and the same credit card readers. Langill points to a time when BWFH’s credit card reader was down and she was able to borrow one from BWH. “Because we are all part of the same system, we are able to share resources much more easily,” she says.

Working across both campuses has also had many benefits for staff and customers. For large catered events at BWFH, Langill is able to tap into her BWH staff for assistance if needed. “We know our existing staff are high performers and can jump right in at BWFH when we need them,” she says. “For the staff, it’s a chance to get to know their colleagues in Jamaica Plain.”

The Chef Exchange Program is another example of shared resources. “We invite chefs from within our entities to visit other sites, sharing their personal cultural cuisine,” says Langill. “When Greek Chef Fotaq Lefteri from BWH visited BWFH, it was a great morale booster. He was able to share his culture and his unique skills, and he enjoyed meeting many of our Greek employees.”

The synergies between BWFH and BWH are just the beginning. Sodexo restructured its regional management support, appointing a Client Executive to oversee all the Sodexo entities across Mass General Brigham. His goal is to align Sodexo’s work with Mass General Brigham’s strategic goals. They have also created a new role—a Sustainability and Wellness Manager—who helps drive sustainability projects across the system. “We now have one person at the system level helping us with food and environmental sustainability and wellness efforts,” says Langill.

One of the main goals of working together is simply collaboration. Langill meets biweekly with Colleen Sullivan, the Sodexo Area General Manager who handles Environmental Services and Food and Nutrition at Wentworth-Douglass Hospital, Salem Hospital, McLean Hospital and Mass Eye and Ear. And, each month, Sodexo retail managers from across Mass General Brigham now meet to brainstorm ideas and share success stories. They even share décor items for special events. “Each of our locations has its own identity—we have different patient populations and employee cultures—but we are all part of Mass General Brigham and all working toward the same goals,” says Langill. “It’s important for us to acknowledge our differences but also to capitalize on synergies where they are appropriate.”