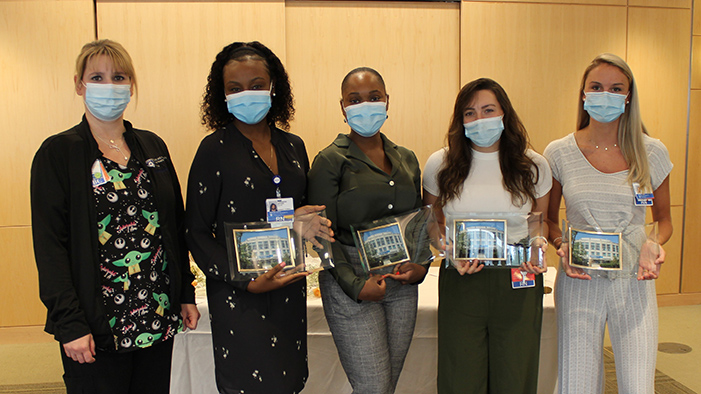 Each year, as part of its National Nurses Week celebration, Brigham and Women’s Faulkner Hospital celebrates its nurses with awards recognizing excellence in critical thinking, commitment to patient teaching, continuing education and outstanding delivery of patient- and family-centered care with compassion and dignity.

As a result of the ongoing COVID-19 pandemic, the 2021 Nurse Recognition Awards ceremony was attended only by the award recipients, family representatives for whom the award is named and hospital leadership.

In her opening remarks, Chief Nursing Officer and Vice President of Patient Care Service Cori Loescher, MM, BSN, RN, NEA-BC, reflected on the challenges of the last year and her pride in her staff. “I witnessed some of the most amazing care that I have ever seen in my entire career. I am in awe and I am humbled by your bravery, your strength and the remarkable care you provide to your patients,” she said.

This year’s winners, listed below, are just a few examples of the amazing work being done within the Department of Nursing on a daily basis.

6 North nurse Terry Doyle, BSN, RN, was presented with the Mary Devane Award. The award was established in 1998, by the family of Mary Devane, to be given to any member of Brigham and Women’s Faulkner Hospital Department of Nursing (RN, PCA, UST, MHW, Secretary) in recognition of their commitment to delivering patient care with compassion, kindness and humor.

6 North nurse Patricia Louijame, BSN, RN, received the Elaine Hazelton Memorial Scholarship Award. Elaine Hazelton’s family established this award in 2009 to be given to a nurse who demonstrates a dedication to Brigham and Women’s Faulkner Hospital within the practice and advance of nursing. This recipient should be continuing his or her nursing education.

7 South nurse Digi Rojas, BSN, RN, received The Angela McAlarney Award. The McAlarney Award was established in 2003 to be given to a member of Brigham and Women’s Faulkner Hospital’s Department of Nursing in recognition of excellence in patient and family education.

6 North’s Cassandra Antoine, BSN, RN, 6 South’s Jacqueline Slattery, BSN, RN, MEDSURG-BC, and the ICU’s Lauren Lavallee, MSN, RN, all received Mrachek Awards. The Mrachek Award was established in 1995 and is given to three members of Brigham and Women’s Faulkner Hospital’s Department of Nursing in recognition of their clinical skills and to support their continuing education in the nursing profession.

Abby Dubel, BSN, RN, from the Float Pool, received the Newly Licensed Nurse Award. This award was established in 2019 and is given to a Newly Licensed Nurse hired in the previous 12 months at Brigham and Women’s Faulkner Hospital in recognition of their personal and professional growth.

The Emmly Fidelia Nursing Support Staff Award was established in 2020 to be given to any support staff member of the Department of Nursing (PCA, UST, MHW, Secretary) in recognition of their integral role to the commitment and delivery of care for the units, staff and patients they care for/work with. This year’s recipient was presented to 6 North’s Barbara Deralus.

The Evidence-Based Practice Award, established in 2019, is given in recognition of a multidisciplinary unit-based team or committee with a project that contributes to evidence-based practice. This year’s recipient was the ICU for their work in CAUTI prevention.

To watch a recording of the full ceremony, click here. 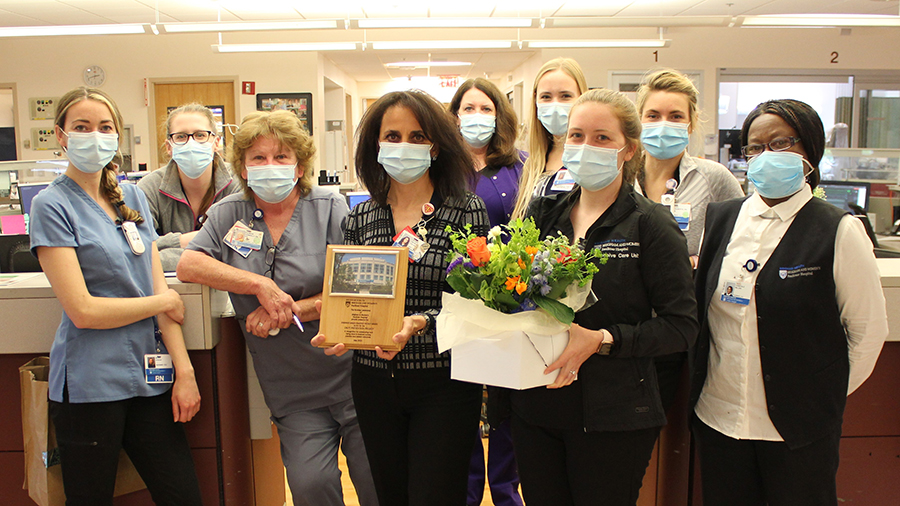