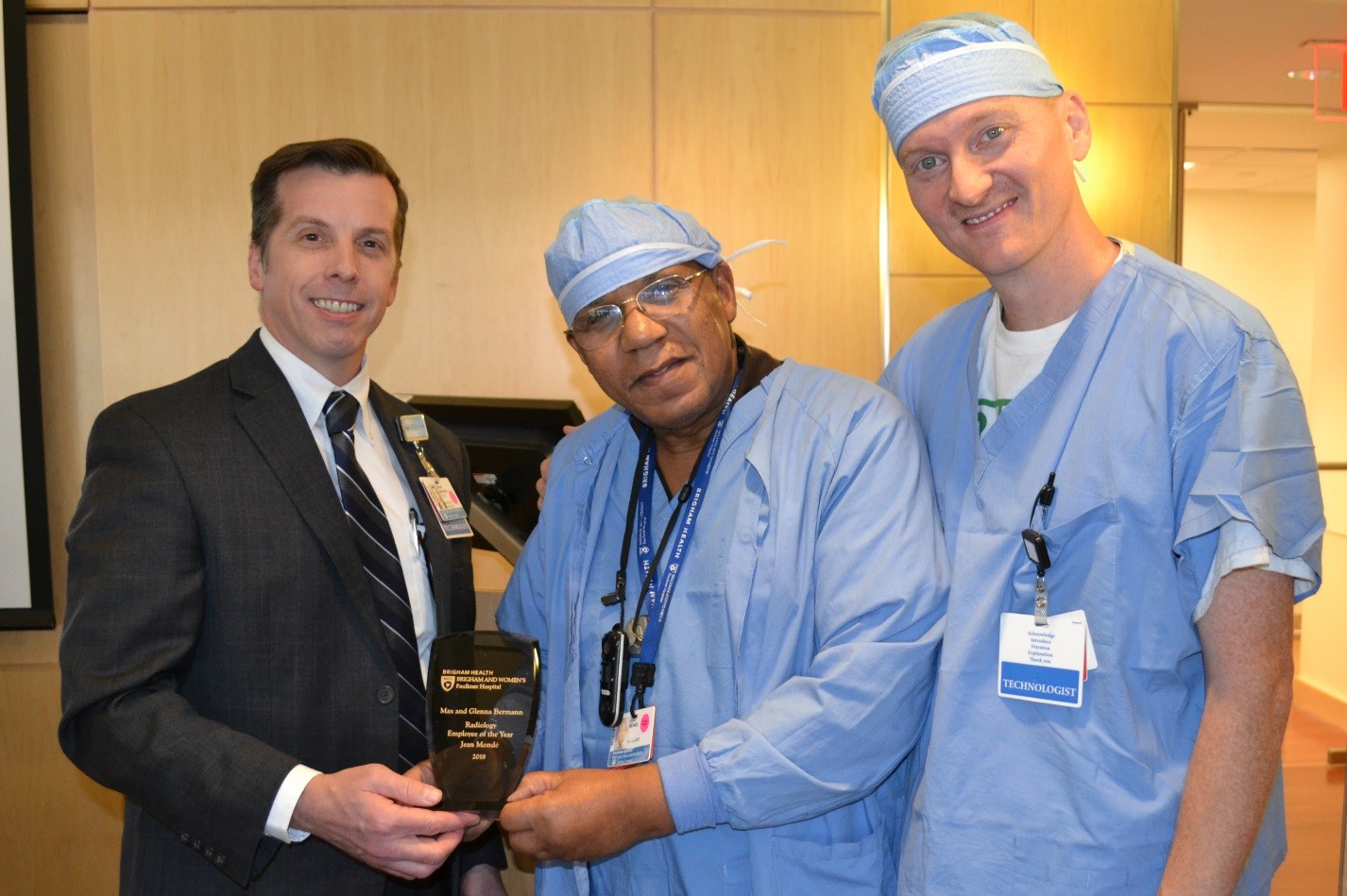 Dr. Max Bermann and Glenna Bermann started working at Brigham and Women’s Faulkner Hospital in 1972. He was a staff radiologist and she was a radiologic technologist. Over the course of their combined 80 plus years in the Radiology Department, they demonstrated an unwavering commitment to their patients. Named in their honor, the Max and Glenna Bermann Radiology Employee of the Year Award is given annually to one individual in the Radiology Department who best exemplifies the qualities of professionalism, patient-centeredness, teamwork, selflessness and self-initiative that are so important to achieving optimal patient care. This year’s recipient is Interventional Radiology Technical Assistant Jean Monde.

In his nomination letter, Elwood describes Monde as a person who exemplifies the I CARE Standards in his everyday actions. His letter reads in part:

Jean’s primary role here at BWFH is to manage room turnover in Interventional Nephrology, but he does SO much more than that. Jean had really raised the bar and increased the expectation of his daily routine and did so with no direction needed. Jean’s impact reaches each and every one of us in Radiology and he does so with little or no fanfare or thanks as quite often he does things that nobody even realizes. Behind the scenes is where Jean likes to be, and I can say with confidence that he is genuinely one of the humblest people I have ever met or worked with. He truly puts everyone’s needs before his own.

The letter outlines Monde’s dedication to his main job responsibilities but goes on to recount the many ways in which he goes above and beyond, including helping out with patient transport, liaising with Materials Management, swapping out linen carts, medical translation for Haitian/Creole patients and even cleaning the breakroom. As Elwood says, “Jean is I CARE!”

Elwood read the letter during a special luncheon as part of the Department’s National Radiologic Technology Week celebrations. Monde was then presented with his award by Director of Radiology Brian McIntosh.

Just as he’s described in his nomination letter, Monde accepted his award humbly, taking the opportunity to thank each and every one of his co-workers for the work that they do, including Elwood. “I want to give a big thanks to Jeff Elwood,” he said. “He is supportive and I always feel confident working with him.”